The urban environment installation “Monument Wars”, created by the artist Aigars Bikše, was unveiled on the intersection of Brīvības iela and Elizabetes iela in the center of city as one of an official event of the European Capital of Culture, Riga 2014 . The installation comprises a dark pedestal from which a different monument emerges every few minutes, symbolising the various periods in the history of Riga and the foreign powers that have altered the culture of the city. Poland and Christianity are symbolised by the Virgin Mary with Jesus in her hands, the soviet period and revolution – by a copy of Gustavs Klucis’ work, the German rule – by a statue of Emperor William I, and Sweden – by a piece of folk art, a black Barbie dressed up as a Swedish maiden. 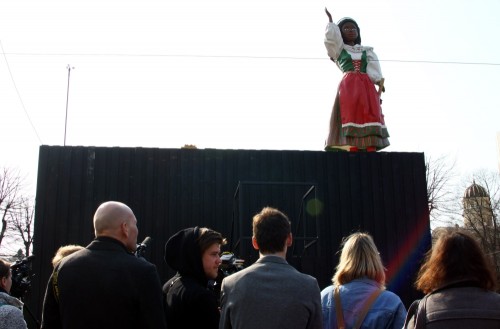